It would only take a moment for antique and classic car connoisseur Ishwarlal Mongru to fall in love with an old-time car and spark a series of events that would bring together Mongru and an old man with whom he would forever share a fatherly connection. The mere moment would also set Mongru on a course of appreciating and preserving various antiques and T&T’s automotive heritage.

Speaking to Sunday Guardian recently, Mongru recalled that while in his 20s, he first laid eyes on a cream antique car as the owner made a U-turn in El Socorro and headed in the direction of Port-of-Spain. The car was a Morris Minor and looked so regal and pristine, that it instantly became the vehicle of Mongru’s dreams of him. He had always loved seeing antique cars and decided he had to have one just like it someday.

Managing his priorities, Mongru later married and started a family, establishing a solid home for his wife and two children. Around 2010 when he turned 40, he negotiated with his wife to finally fulfill his dream of purchasing an antique car. Although he knew such vehicles were scarce, Mongru, who worked at a financial institution, told his boss of him one day about his deep desire to purchase a Morris Minor and was shocked to discover that his boss of him had a neighbor who had such a car. His boss, however, insisted that the owner would not sell it. But fate had something else in store.

It was the week of Christmas 2009 and Mongru thought he would still try his luck and give himself a treat. Determined that he would at least go to see the car, he persuaded his boss to give him directions to the neighbour’s house.

The car owner was a retiree by the name of Derek Aleong and there at the garage of the St Augustine home he shared with his sister and her husband was a 1967 Morris Minor by British Motor Corporation England, number plate PK 9596. Mongru was ecstatic.

“That was the exact car I had seen years before and I was just so amazed by it. He said no he was not selling it, that he would die with that car. I told him I just wanted to see it. I was so excited, I was like a child. Through all the passion I had for the car, I just left my number with him,” Mongru recalled.

By February 2010, Aleong was calling Mongru to discuss selling the car. The old man explained that his sister de ella had passed and he also had her 1966 Morris Mini Traveler to manage. He told Mongru he wanted a good place for his Morris Minor. 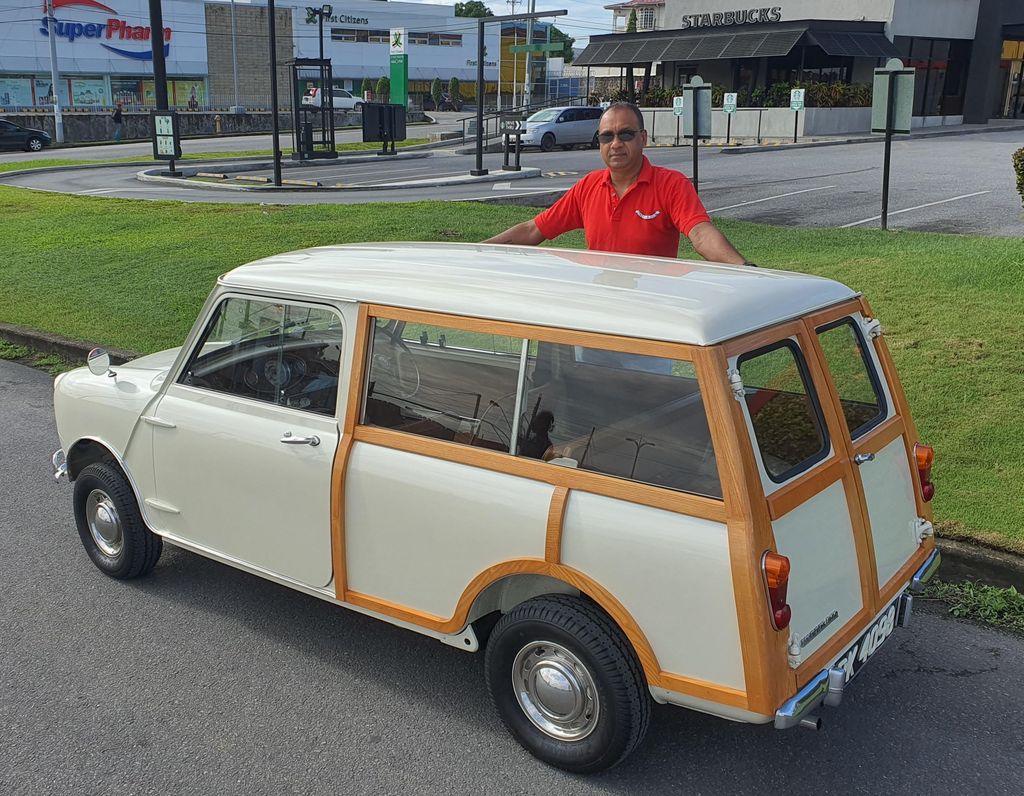 “He said ‘all these people passed and asked to buy the car. I think the right home for it would be you.’”

Mongru could hardly believe it and wasted little time organizing the payment. He felt the man trusted that he would take good care of the old-time vehicle after seeing his enthusiasm from him and the time and effort he had put into researching Morris Minors. Thus began their deep bond.

Mongru started dropping in at Aleong’s home for visits on his way from work in Port-of-Spain, especially when he felt stressed. At first, he showed up every month, then much more regularly. Pink grapefruit, Julie mango and other fruit trees in Aleong’s yard were their backdrop, the two would sit in the gallery on metal mesh chairs and talk for hours.

So, too, was the connection they developed. The old man who had worked at a newspaper and did wedding photography as a side job would share past experiences and adventures with the car like the day a coconut fell on the car’s bonnet at the beach and put a small dent in it, the time a Hillman Hunter swiped the back right fender, and the only time the car ever remained out of the garage in the night dew because the battery died after he had returned from taking photos at a wedding and he could not hand crank it and roll it inside. The old man used to simply enjoy driving the car all over the country, Mongru said. 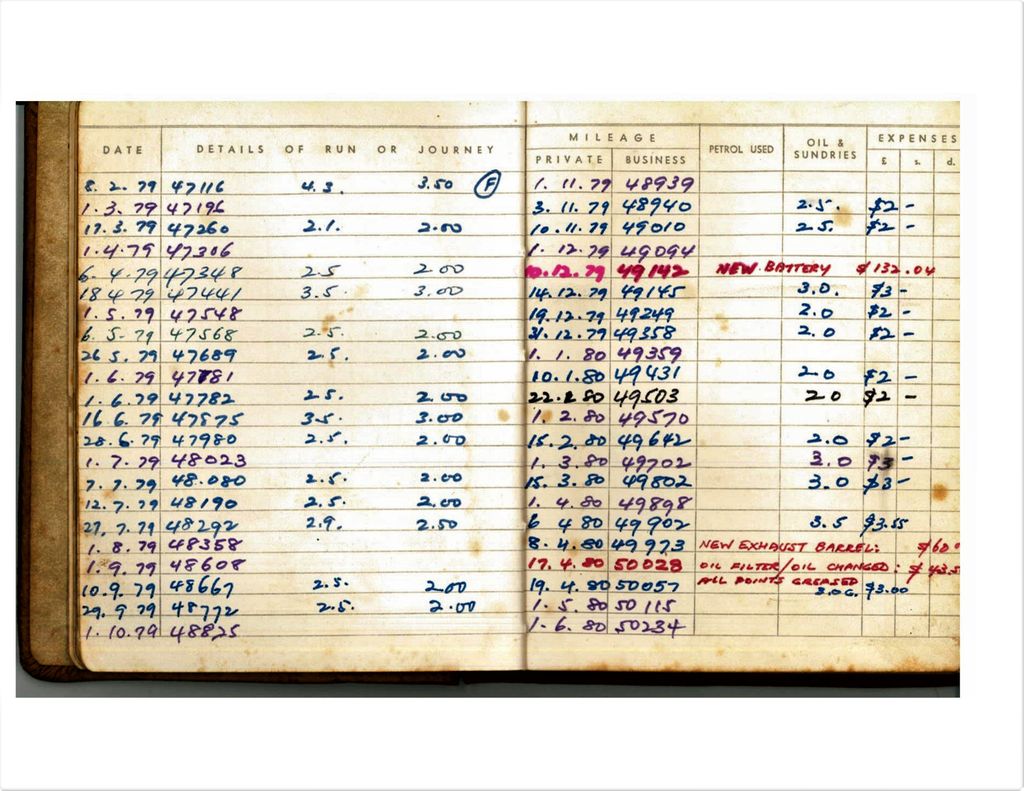 A page from Derek Aleong’s diary showing the Morris Minor’s gas and service history from 1979 to 1980.

“In those days, to go to South from St Augustine was a big deal. It was like the preparations to fly to Tobago nowadays. It was a great journey. That’s how he used to make it out to be; that the car would drive all the way down there and come back without any problems.

“I have cherished the car like a wife. He really took care of that car. He referred to it as 96 and he would talk about it like a person, ”Mongru said.

Mongru saw time with the old man as his “window to the past,” his “stress relief” and his “moments of enjoyment.”

“He used to be glad when I would go there because he was alone. Sometimes in the night (Aleong said) he would be waking up, he couldn’t sleep and he was bored. He had this voice clock radio so every hour he would say the time. He was glad to have company to talk about the good old days and I was happy to hear about the good old days.”

They talked about all Aleong’s travels in Trinidad; his trips to take wedding photos, driving down the stretch to South when there were no highways, his limes since he was “a real limer when he was young,” his life in Woodbrook when it was undeveloped with very few houses before he moved to St Augustine, and his Carnival exploits.

He also showed Mongru some of his long-time cameras and at times they also did a little mechanic work.

Mongru had his father, Sirkissoon Mongru, who taught him to fix things. I have turned 96 this month.

“I turned out to be the fella who would dig up everything and fix cars, fix things around the house. That part I learned from my dad. I remember being small outside with him fixing cars,” Mongru shared. 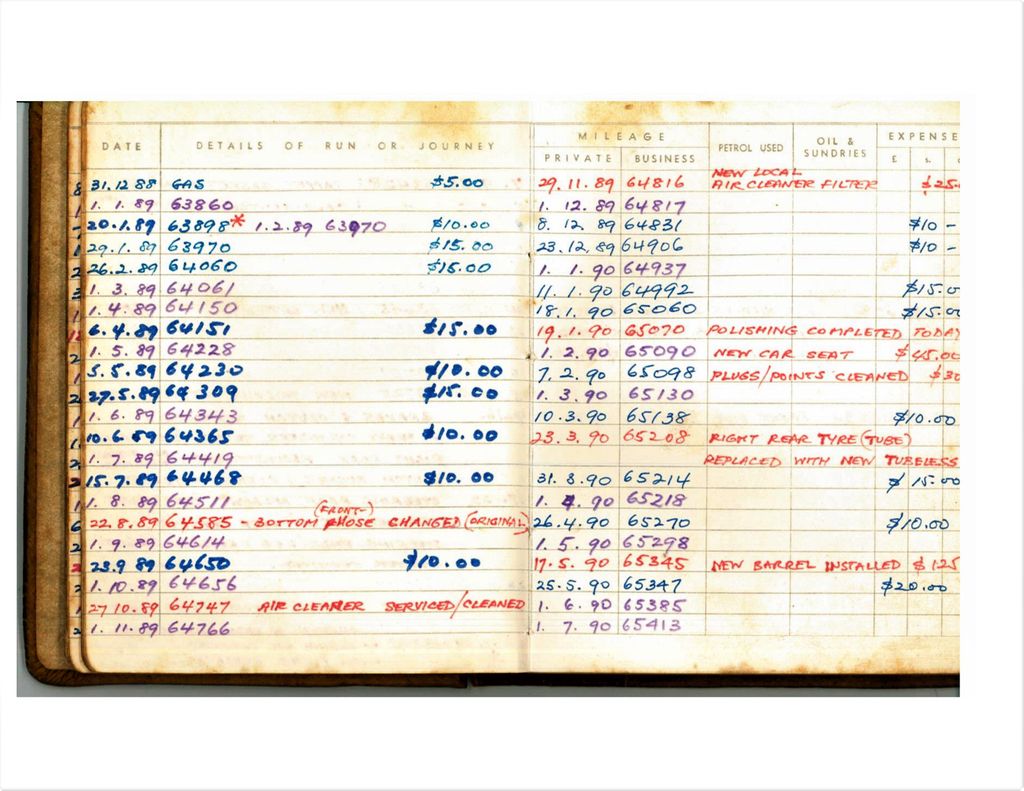 A page from Derek Aleong’s diary showing the Morris Minor’s gas and service history from 1989-1990.

But Aleong became like a father figure and taught him how to care for his possessions and enjoy a simple life. Mongru developed an appreciation for preserving T&T’s automotive and national heritage, becoming president of the T&T Classics Antiques Replica Club (T&T CAR Club) in 2013.

Aleong passed away in his 80s and is a man Mongru will always regard.

His second vehicle, Aleong had bought the Morris Minor from a company called Trinidad Agencies Ltd for about $2,200 or $2,600 and the original warranty was for six months. He had owned 96 for 40 years and kept a little black book of every dollar spent on maintenance on the car, including gas. The book shows how drastically gas prices have changed over the years.

Mongru still has the car’s original leather-wrapped spare key and original tool kit. The back in the day hand-braided steering wheel cover and gear lever handle cover are also still on the car. He has not done any major work on the antique car which still has its original factory paint, upholstery and engine. He did what he called a slow restoration, servicing the car and changing the tires and carpet.

Mongru also bought Aleong’s sister’s Morris Mini when the old man could no longer drive and was again concerned about giving the car the right home. When Aleong’s sister had been alive, the two cars would sit parked in the garage side by side when not in use.

“He asked me to take over the mini because the same way he lived with his sister, he saw the cars as brother and sister and didn’t want to separate them,” Mongru said.

Mongru also purchased the Mini which also was never repainted and promised to restore it to a factory finish condition. It is possibly one of two Morris Mini Travelers (woody wagons) with double barn-style rear doors that could still be found on T&T’s roadways. He recently completed a “frame-off” restoration, restarting from its sheet metal, rebuilding its original 848cc engine and keeping its iconic ten-inch wheels. Back in the day, prospective owners of Morris Minis could choose ones with a wood finish as a fashionable and luxurious option. Because Aleong had always wanted the car to have the wood option, Mongru sourced and added the original ash wood kit from the UK as a tribute to the old man when he did the restoration.

Composed of a group of old-school car enthusiasts who meet every Sunday morning for breakfast near the Gulf City traffic lights just off South Trunk Road, La Romaine, Mongru’s car club encourages people to the drive their old-school cars whether or not they are fully restored. They participate in activities from car parades, the annual Southex car exhibition at Gulf City and car shows to attend social rallies and embarking on charity initiatives.

Mongru owns a small old-school car collection and has shown his own children the value of conserving antiques. He and his wife converted their garage into a retro-style theme and he keeps mementos from his parents and grandparents on display at his home. He has taken his family for drives to various parts of Trinidad in his old-time collection of cars over the years and to various parades and drive abouts with the club.

“Derek would have preserved a piece of history for me and I am now able to show to the world what he did. You have to take care of stuff and I am trying to do the same thing now; take whatever I have from the past, preserve it and show people what things used to be like and share some of the stories from back then,” Mongru said.

The avid antique car lover will ever remember his time spent with Aleong and how they came to bond over a beloved car.