Alan Titchmarsh: The best plants to grow in a boggy garden

Alan Titchmarsh doesn’t like soggy socks, but there are plants that love standing around in the damp all day.

I can think of few things more uncomfortable on a daily basis than wet feet. Give me a good pair of wellies and I am happy. There are plants, however, that relish having their feet in water. A soggy bottom holds no fear for them; remove the reverse, they reveal in it. Position them at the side of a stream where the water supply is constant at their roots and they will reward you with a display that is at its spectacular best in spring and early summer.

These are plants that are native to boggy areas — their roots have adapted to function in areas of poor drainage where many other plants would suffer and drown. I am not talking about the marginal aquatics here: those denizens of the shallows who like water up to their waists. The streamsiders prefer their water to be underground. They can go for a few days without copious supplies, but much longer than this and their health begins to suffer. Apart from their usefulness at populating ground that other plants would shun, they are perfectly positioned to be complemented by the nearby flow of water when it comes to reflections.

There is something deeply satisfying about seeing an elegant stand of iris kaempferi, for instance, alongside stream-fed pools. Their slender, but sturdy flower stems, topped with a bright fleur-de-lys, and their sword-like leaves are duplicated in the glassy surface.

our native flag iris, Iris pseudacorus, is happy on the edge or to wade into the water where it will advance until it is, quite literally, out of its depth. Those yellow flowers simply shine at the water’s edge, and lovers of green-and-white striped leaves can enjoy the variety ‘Variegata’ — handsome even out of flower. 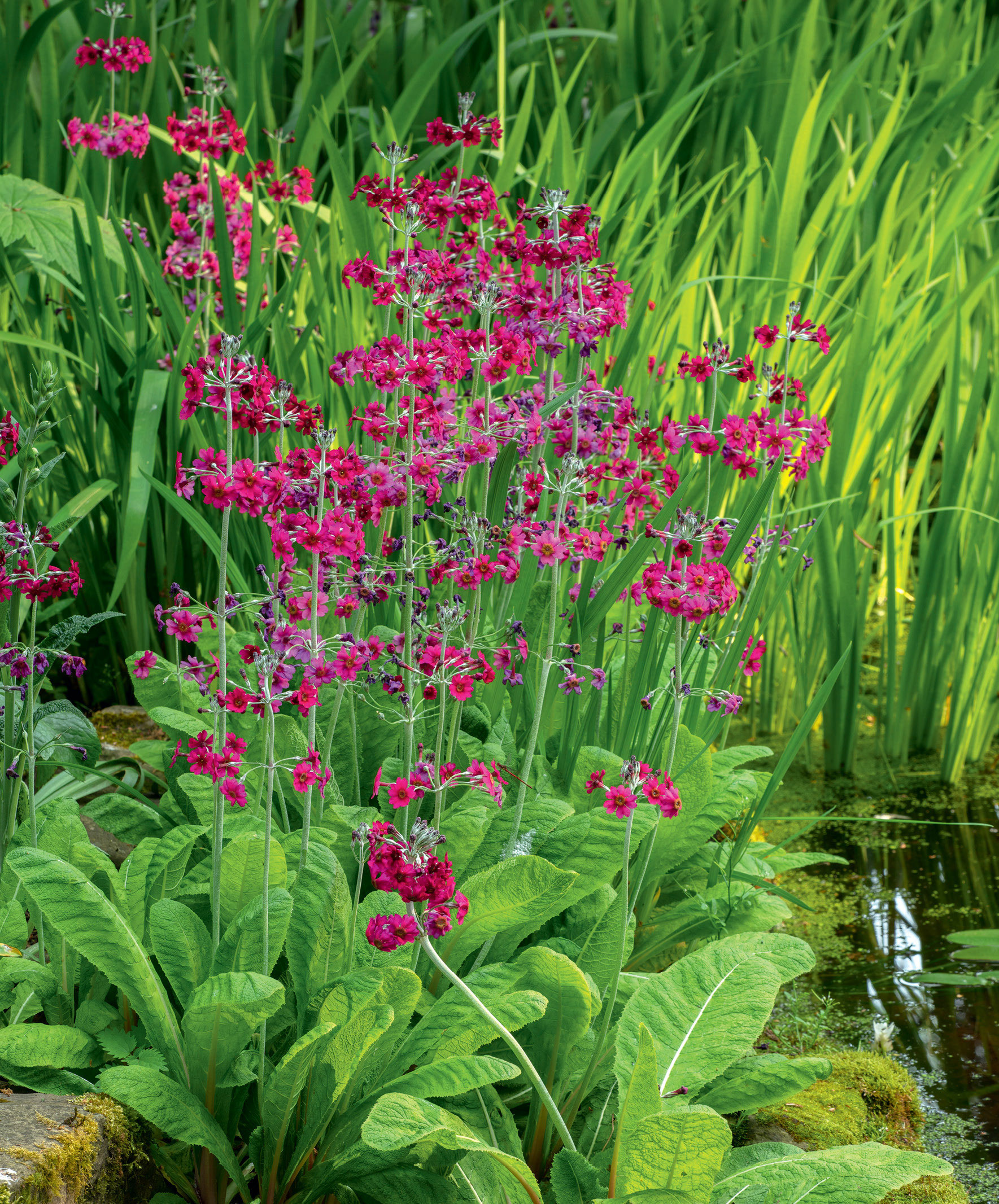 There are hosts of plants suitable for damp stream margins — from the earliest flowering ‘water blob’ (that’s a Yorkshire childhood coming to the fore) or marsh marigold Caltha palustrisflowering as early as March, to astilbes with their feathery plumes and the sweet flag after which Iris pseudacorus is named: Acorus calamus. Its leaves are smooth and sword-like, glossier than those of the iris, and they give off a sweet tang when crushed. Don’t expect floral spectacle here, for the flowers are dull green pokers that emerge from the folded leaves.

If spectacle is what you want, then by far the best bet are the candelabra primulas. There are lots of them, with tiered whorls of flowers spaced up stems that may reach as much as 3ft high in damp earth and dappled shade. powdery primula is the color of a good burgundy, P. cockburniana is orange and P. florindaethe Tibetan cowslip, is a later-flowering beauty with a single clustered head of pale-yellow flowers dusted with white farina. 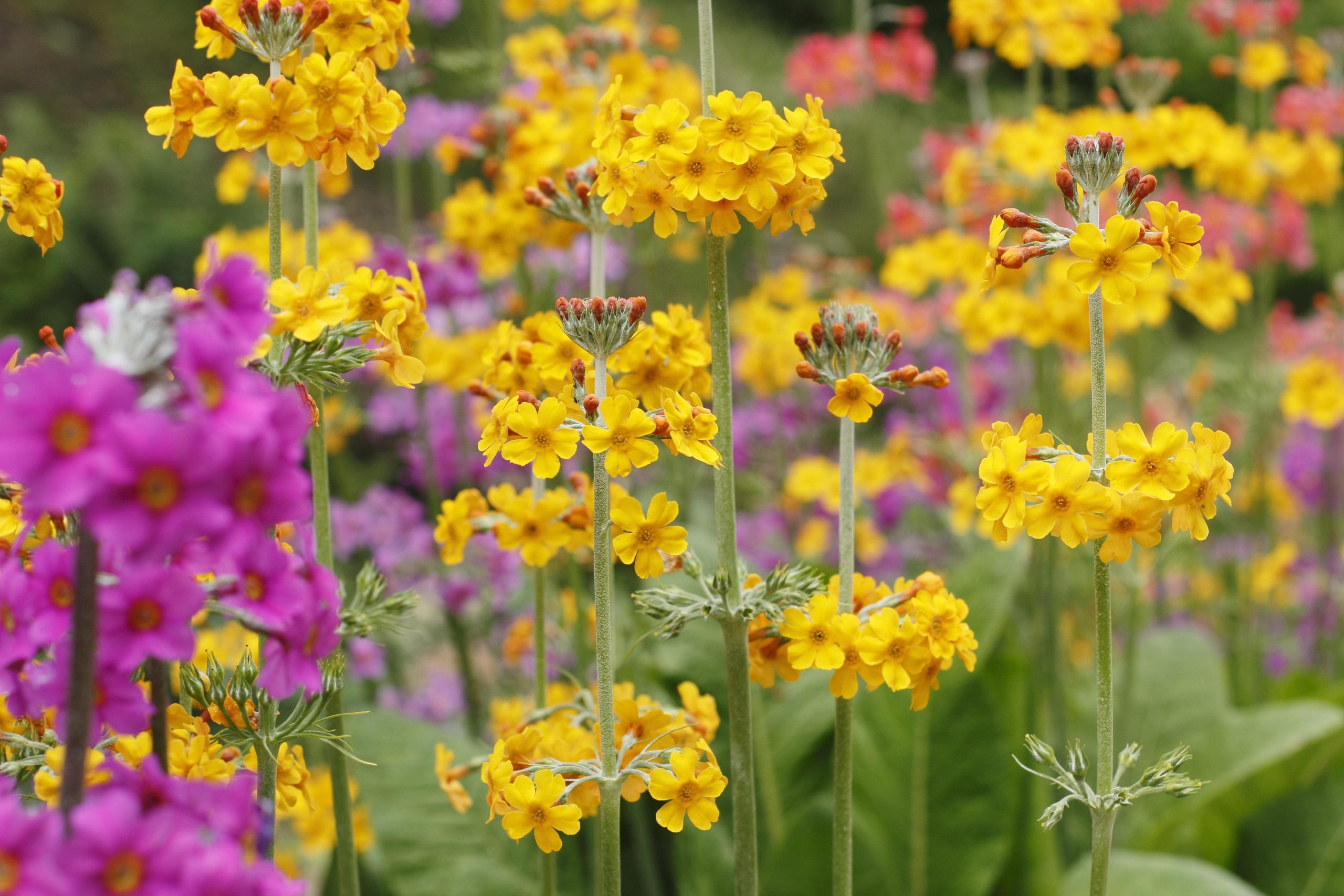 Drifts of Candelabra primroses flowering by water in a shaded garden.

Perhaps the most elegant is Primula vialii — the clustered rosette of narrow leaves arise from stems topped with a narrow pyramid of lilac flowers that are crimson in the bud. They open gradually, from bottom to top, extending the flower spike as they do so. It is the red-hot poker of the primula world.

If I were limited to one primula, it would be a selection that seeds itself and offers a kaleidoscope of pinks and oranges that, when growing together, never present a jarring picture. The ‘Harlow Carr Hybrids’ — bearing the name of the garden near Harrogate in North Yorkshire where they originated — are easily raised from seed and will increase year on year in damp earth where they are happy. They are reliably perennial and, when grown in generous drifts, they have the ability to stop passers-by in their tracks.

There is an elegance to these primulas — not a word that could ever be applied to the American skunk cabbage or bog arum, Lysichiton americanus. The enormous yellow spathes emerge from the streamside mud in early spring, to be followed by massive, yard-high rubbery leaves that offer a contrast to more fussy foliage nearby. The plant is hugely invasive and legislation is now in place to prevent it from being planted in gardens. The sterile form lysichiton x hortensis (a cross between L. americanus and the white-flowered L. camtschatcensis) is a more responsible choice for those who value its beefiness. Its spathes are creamy white, edged with green. On balance, give me candelabra primulas and irises any day.

Alan Titchmarsh’s greenhouse has become a bit predictable – but he’s now got big plans to mix things up.

As time opens up for all of us to spend more time in the garden, Alan Titchmarsh offers his tips

Alan Titchmarsh admits that it’s not just gardening’s most challenging tasks, but also its the mundane chores that ‘give me